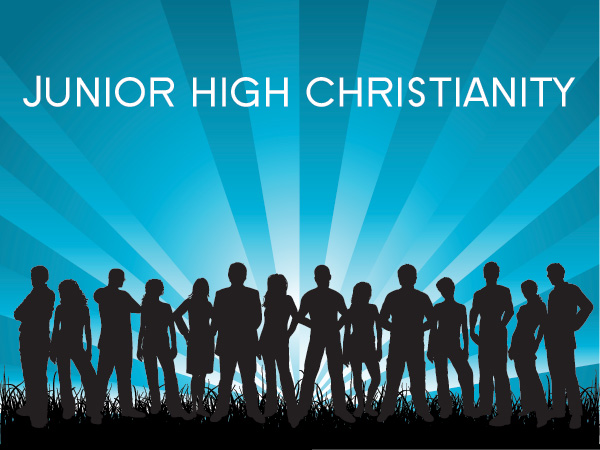 Junior High.  It’s a funny stage of life.  Junior High Students are definitely NOT kids, but aren’t quite ready to be trusted with the responsibilities and privileges of being “older.”  Many junior highers feel the desire to take on the responsibilities that come with more age, but aren’t deemed ready (in many cases for good reasons).  And so, in our culture, many Junior High Students are waiting.  Waiting for the day that they get into high school.  Waiting for the day they get into college.  Waiting.

Sometimes I wonder if this attitude of waiting seeps into our thinking about ourselves in our Christian life.  Many Junior High Students are waiting to really live for the Lord until they are older.  Obeying God and living for Him may be something that I want to do; but I’ll probably do it in the future.  When I’m ready.  When I’m older.

Two weeks ago we began a study with the Junior High group called “Junior High Christianity.”  We saw that that God doesn’t one thing that He wants from adults and a “Junior High” version of that which is lesser.  We saw from Matthew 22:37-38 that Jesus says the greatest commandment is to Love God with all our heart, soul and mind.  We saw that he was quoting from Deuteronomy 6 in the Old Testament, a passage that Moses had told the Israelites to teach to their children.  God wants all people, regardless of their age, to live for Him “all-out.”  We also saw that one of the best ways that we can show we love God “All-Out” is to obey Him.  Jesus said in John 14:15, “if you love Me, you will keep My commandments.”

And so, we’ve begun to look at Junior Highers in the Bible who did just that- loved God all out and obeyed Him.

We first looked at Daniel, and how he lived with integrity.  Daniel was taken along with many other of the “youths” of Israel (and some of the royal family) into captivity in Babylon and were told to eat the kings food, which was most likely against the dietary instructions God had given Israel and probably also had been sacrificed to pagan idols first.  Daniel 1:8 says, “But Daniel resolved that he would not defile himself with the king’s food, or with the wine that he drank.”  Daniel was determined to love God all-out in obedience.

As far as we can tell from the text, none of the other Israelites besides Daniel and his 3 friends wanted to obey God in the midst of this difficult situation.  Think about this situation- they are in captivity, all of the other Israelites were doing it, nobody back at home would have probably found out.  It seemed like such an easy situation to give in.  But Daniel and his friends didn’t obey God because it was easy, or because it made them popular.  They obeyed because they loved God all-out.  And so their lives weren’t lived with different standards when they were in Israel worshipping at the temple or when they were in captivity in Babylon, surrounded by non-believers.

There are so many parallels between Daniels situation and the situation that many of you Junior Highers face every day you step foot into a public school.  For the most part, you’re surrounded by other students who don’t love God and by all means don’t want to help you do what’s right.  You could probably live differently at school and fit in there and maybe nobody at home or church would even know.  We could live our Christian lives on “cruise-control,” where we bring our obedience to the Lord to a comfortable level (based on the “speed” of those around us, which changes) and then stop trying.  Or we could live our Christian lives like race-car drivers, where we are going “All-Out” and trying to love and  obey our God as much as we possibly can for His glory.

Here’s the encouraging thing.  Daniel wasn’t anything special.  He was just a guy who God enabled to love Himself and to obey Him.  The same God who worked in Daniel’s life is the God that we worship.  He is just as powerful to help His people live lives All-Out for Him in a radical way today as He was then!  And what He wants from us is a willingness to Love and Obey Him completely.